Over the last few weeks, we’ve looked at some of the big names in Old Testament history – Adam, Abraham, Moses and David. Now we’re heading to a part of the story that’s a little less familiar. As Judah’s monarchy continued, most kings did evil in the eyes of God. This led the people of God down a slippery slope, heading deeper into sin and idolatry. Through his prophets, God gave warnings of judgement if they didn’t turn back to him. By the time of Ezekiel, this judgement had come – Babylon had destroyed Jerusalem and taken many people into exile. In fact, Ezekiel himself was writing his prophecies while exiled in Babylon.

Judah had reached the bleakest point in its history. Yet, in the midst of this judgement, God breaks through with a promise of restoration. He promises that he will gather his exiled people and return them to the Promised Land. God remains faithful to the covenant he made to Abraham all those years ago. Alongside that, he promises to renew the covenant relationship – that they would live in their land as God’s people, in personal relationship with him.

For I will take you out of the nations, I will gather you from all the countries and bring you back into your own land.

Yet, simply restoring the people from exile wouldn’t deal with the real problem. The sin and idolatry that destroyed Judah would only come back. The relationship of the covenant people towards their God would be defined again and again by unfaithfulness, apathy and disobedience. For we, as people, have hearts that are hard and incapable of truly obeying God’s ways. It’s a problem so deeply ingrained within us, something that can’t be fixed by just trying harder next time.

In light of all this, God promises something completely ground breaking and revolutionary.

I will sprinkle clean water on you, and you will be clean; I will cleanse you from all your impurities and from all your idols. I will give you a new heart and put a new spirit in you; I will remove from you your heart of stone and give you a heart of flesh. And I will put my Spirit in you and move you to follow my decrees and be careful to keep my laws.

He doesn’t just promise a new moral direction or new strategies to better keep the law. God does something we’re completely incapable of doing for ourselves. He says he’ll actually take the hard hearts of his people and transform them into hearts of flesh. Hearts that are able and willing to live for God and obey his commands, not out of obligation but from a genuine desire. So that we can live in true covenant relationship with him as our Lord and we as his beloved people. Such a transformation can only come from God!

This same transformation is echoed in Jeremiah 31, where God promises to make a new covenant with his people. Something that goes far beyond the external laws and rituals that governed our hearts of stone. A covenant that will be defined by God’s law written on our minds and our hearts. By a genuine and personal relationship with God made available to all people. By complete forgiveness of sins.

If we jump ahead a few centuries, we find Jesus talking with Nicodemus about what it means to be born again. Jesus says that no-one can enter the kingdom of God unless they are born of water and the Spirit. This goes right back to the imagery of Ezekiel 36, where God promises to sprinkle cleansing water on his people and put his Spirit within them. Jesus is saying here to Nicodemus that he is the fulfilment of that promise. He’s the one who deals with the heart problem of sin, who not only covers our sins but completely washes them away. He’s the one who transforms our hearts, through his Spirit, into hearts of flesh beating for God.

We’re nearly finished A Holy History! It’s not too late to download your free PDF booklet for reflection questions and journalling space!

I’m Bella – wife, mama and tea drinker. I live in Sydney, Australia with my husband and our two baby boys!

My biggest heart for this little corner of the Internet is to share God and his Word.

Please stop by and say hello! 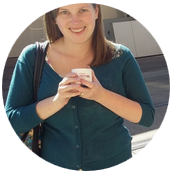