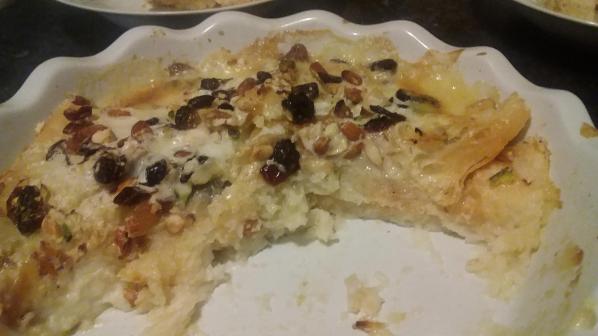 This is the first of our cuisine weeks, and it worked a whole lot better than our last few cuisine nights. One dish a night is a whole lot more manageable – we’d have to cook a meal each night anyway, we might as well make it fit a theme! Egypt is one of the few countries I’ve travelled to, and I do remember eating something similar to our main course while over there. 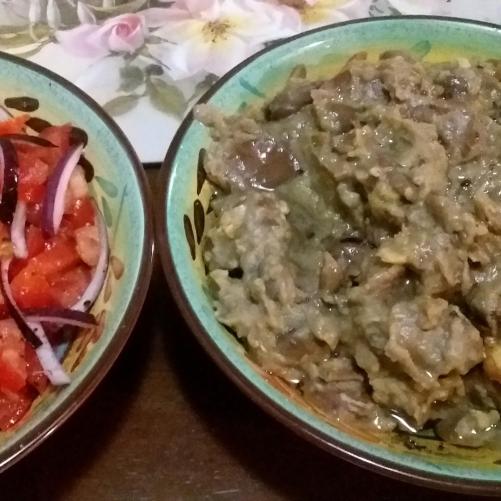 Apparently this is a popular breakfast dish in Egypt, although we ate it around dinner time. It’s fava beans slow cooked until they reach a creamy consistency like hommus This could have been really good comfort food, if only I had shelled the fava beans before cooking them. The recipes I looked at didn’t mention anything about that, maybe the beans they used were already pre-shelled. But, apart from that, it still tasted nice once I removed the shells from my bowl. We served it with pickles and pita bread and, yes, we did have it for breakfast the next day.

This was carbs on top of more carbs. A sort of carb salad including macaroni, rice and lentils, freshened up with a fattoush salad on the side. The thing that made the dish beautiful, though, was the sauce on top – tomato mixed with warm spices like cinnamon, nutmeg, cumin and paprika. We made a big fat bowl of this and ate the leftovers for a few days.

Om Ali is pretty similar to a bread and butter pudding. Instead of bread, our recipe used puff pastry which we crisped up in the oven before we poured the milk mixture over the top. It also had cranberries, almonds and pistachios mixed through, which gave it an edge above the standard bread and butter pudding. The puff pastry on top was nice and crispy, while the inside was soft and custardy. I think I ate way too much of this one!

Last year we did a Portuguese cuisine night to celebrate Portugal winning Eurovision. This year, we’re planning to do a similar thing. So our next cuisine will almost definitely be European (or Israeli, or Australian!)

I’m Bella – wife, mama and tea drinker. I live in Sydney, Australia with my husband and our two baby boys!

My biggest heart for this little corner of the Internet is to share God and his Word.

Please stop by and say hello!